Given the rising popularity of cannabidiol (CBD) as a therapeutic alternative to pharmaceutical drugs, it makes sense that the populace is going to wonder how CBD interacts with alcohol – perhaps the most ancient intoxicant in the world.

The jury is still out on many of the subtler points of the pharmacodynamics between these two substances in the human body, but research has still made some exciting discoveries. Before delving into the specifics, it’s essential to have a basic understanding of endocannabinoid (literally cannabinoids made inside the body) functions.

The Role of Endocannabinoids in the Human Body

Endocannabinoids act as a flow control mechanism, ensuring that just the right amount of neurotransmitters flow between neurons, to avoid over-excitability or deficiency. Endocannabinoids are the ultimate regulators, providing balance in the mind and body at all times. They are the masters of homeostasis.

Another critical fact to consider when ingesting both CBD and alcohol is the impact on your liver enzymes. In those who drink only occasionally/socially, your body metabolizes nearly all alcohol via alcohol dehydrogenase (ADH) or aldehyde dehydrogenase (ALDH).

However, in chronic consumers of alcohol or alcoholics, the body ramps up the production of CYP450 enzymes to help when the central alcohol metabolic pathways become overloaded.

As you may know, CBD is a potent inhibitor of CYP450 enzymes, and as such, those who drink alcohol on a regular basis and also consume CBD may be at a much higher risk for unpleasant complications from potential interactions. 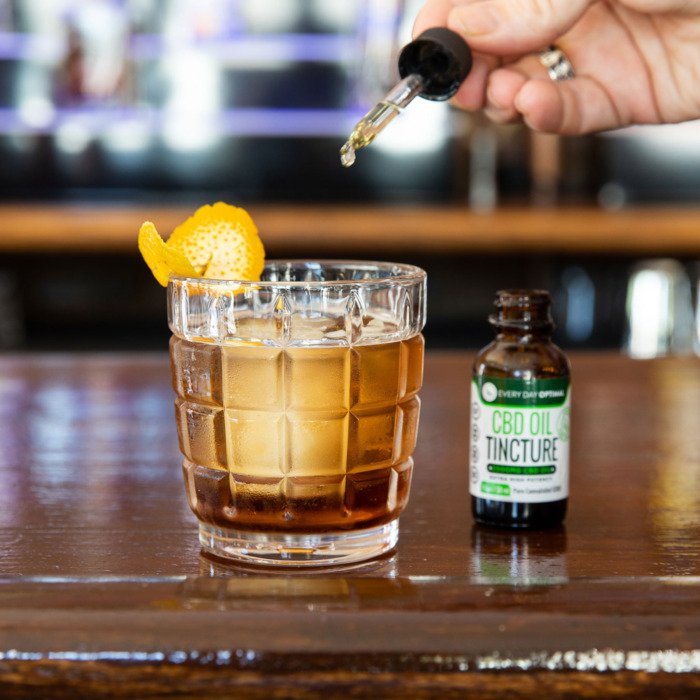 Health Benefits of CBD and Alcohol

There is a bright side to all this anxiety-inducing uncertainty with consuming CBD and alcohol simultaneously. As discussed earlier, endocannabinoids (and CBD) moderate neurotransmitter levels – including dopamine. Most everyone knows about dopamine – we all crave more of it. In fact, many CBD retailers like Isodiol are coming out with alcohol products infused with hemp CBD since there’s such a market for dopamine-inducing products.

Sex, food, cigarettes, drugs, skydiving, getting promoted – dopamine fuels the lot of it. Dopamine drives us to excel and experience intense highs; moments of supreme bliss. Drinking alcohol increases levels of dopamine in the brain; this is the quintessential reason that people become drunks – it feels incredible! Pleasure!

Now, when you ingest a high-quality CBD oil and then try to get wasted – you’re not going to experience that same intense drunk feeling. The neurotransmitter modulating effect of cannabinoids that we discussed earlier keeps the intensity of that alcohol-induced euphoria severely in check.

You can throw back drink after drink, but the CBD is going to tell your brain, “hey, take it easy, this isn’t a race,” and it will be impossible to achieve that level of obliterated-ness that many alcohol drinkers live for.

The Paradox of CBD and Alcohol Consumption

It’s a catch 22 if you will. If you want to get blasted entirely out of your gourd on alcohol – do not consume CBD. You will not be able to achieve the same levels of intoxication. If it is the absolute dissolution of consciousness you seek when imbibing alcohol – leave the CBD out of the mix.

Now, for those who are looking to reduce or eliminate their alcohol consumption entirely…CBD may be the best tool in your arsenal. Not only will you experience all the health benefits of CBD (anxiety/pain reduction, enhanced sleep, general sense of well-being) but with CBD you can train your brain to, well, not really give a hoot about booze – because it’s just not giving you that exhilarating ‘high’ you’re used to seeking.

The Bottom Line With CBD and Alcohol

Although ethanol is as ancient as the invention of the wheel (most likely even older) CBD is incredibly fresh and (for the most part) untested – especially concerning combinations with other psychoactive.

Taking a high-quality CBD oil is liable to reduce your cravings for alcohol (according to studies published by NCBI) as well as reducing the intensity of your drunkenness.

The potential interactions between alcohol and CBD are most likely not of a severe nature – indeed no more dangerous than drinking a beer and smoking a joint.

Regardless, you have but one brain and body, and we advise you to treat them with divine respect. Human beings are powerful, and the choices affect not only you but all those around you. Be informed, and choose wisely. Much Love!