You’ve probably heard the terms cannabis, hemp, and marijuana. Many people think that these are different plants.

While hemp and marijuana differ chemically, the truth is, they both belong to the same species: Cannabis sativa.

What sets them apart is that marijuana is high in tetrahydrocannabinol (THC), the main intoxicating component of cannabis, whereas hemp is low in THC. But that’s far from the only difference.

Read on for a closer look at hemp vs. marijuana in terms of their effects, uses, legality, cultivation, history, and more.

Marijuana is the term for cannabis and its preparations that can get you high. Legally speaking, this means any cannabis plant with more than 0.3% of THC by dry weight.

This 0.3% limit applies to the United States, the European Union, and some other countries.

THC is the main intoxicating component of cannabis and some plants can contain as much as 35% by dry weight. As a result, marijuana is illegal in many countries around the world.

Marijuana is often differentiated into “indica” and “sativa” cultivars based on their general effects and physical appearance.

This idea originates from the 18th-century French botanist Jean-Baptiste Lamarck, who assigned the species name Cannabis indica to intoxicating varieties of cannabis found in India. ²

However, this distinction is hotly debated and gradually disappearing in favor of differentiating cannabis by its composition of cannabinoids and terpenes: the two main active components of the plant.

Hemp is the term for cannabis cultivars that contain very little THC (0.3% or less by law). Since this amount is too small to make people intoxicated, hemp is legal to grow and consume in many countries.

One of the most versatile plants known to man, hemp has been used for thousands of years to make food, rope, fabric, paper, medicine, and more.

These days, most people know about hemp because of the popularity of hemp-derived CBD oil and other CBD-rich health and wellness products. While the majority of CBD products on the market are derived from hemp, it’s worth noting that you can technically make these products with marijuana.

You may also encounter the term “industrial hemp” to refer specifically to the cultivation of hemp for its fibers and seeds rather than cannabinoids.

Laws differentiate hemp and marijuana by their THC content. However, they also differ in many other ways, including their precise chemical composition, effects, consumption methods, uses, legality, and cultivation. 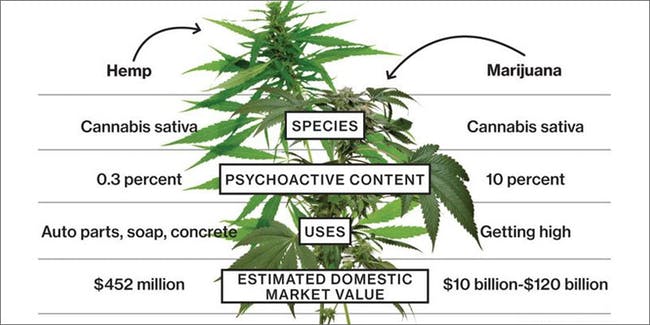 Chemically speaking, the main way of differentiating hemp vs. marijuana is the level of THC. To be considered hemp plants, cannabis must contain no more than 0.3% of THC.

Aside from that, the two types of cannabis have much in common. Both can contain varying levels of CBD, which is always abundant in hemp and can vary from as little as 0.1% to as much as 20% by dry weight in marijuana.

In fact, some marijuana strains can even contain more CBD than THC. Regardless, due to higher THC levels, marijuana will always cause some psychoactive effects.

Both marijuana and hemp also contain dozens of minor cannabinoids, such as CBN, CBC, and CBG as well as a distinct variety of terpenes — compounds that contribute to the aromas and health effects of cannabis. ³

Since THC is the main psychotropic component of cannabis, marijuana is best known for its intoxicating high. It can also produce relaxing, mood-enhancing, sedative, energizing, and other effects.

The precise effects of marijuana are dependent on the composition of cannabinoids and terpenes: the two main active components of cannabis. ⁴

Hemp, on the other hand, doesn’t produce intoxication because its THC content is too low. As such, unless you’re extremely sensitive to THC, your chances of getting high from smoking hemp are close to zero.

Hemp-derived products are likely to promote a feeling of clear-headed calm and relaxation because of the high CBD concentration.

Another difference between marijuana and hemp is in how they’re consumed for their health effects.

Today, marijuana is most commonly smoked, although many people also use concentrated products and extracts, such as marijuana-derived oils, edibles, and vape products.

Hemp can also be smoked but is more commonly used to produce CBD oil, capsules, gummies, topicals, and other concentrated products rich in CBD.

Marijuana is used both recreationally and therapeutically. THC plays a central role in both effects since it’s the main active component of marijuana and has both intoxicating as well as many beneficial properties. ⁵

When it comes to marijuana, people typically use one specific part of the plant: the flowers. Also known as buds, they’re abundant in tiny hair-like structures called trichomes that contain the cannabinoids and terpenes which produce most of the plant’s health effects. ⁶

Marijuana leaves can also be used to make nutritious, cannabinoid-infused drinks and edibles, such as tea or butter.

As a medicine, there’s substantial evidence that cannabis (usually in the form of marijuana) can help with chronic pain, vomiting associated with chemotherapy, and muscle spasticity caused by multiple sclerosis. ⁷

Hemp can also be used therapeutically. The most popular method is to extract CBD from hemp flowers and dissolve it in a carrier oil to make CBD oil.

Like THC and whole-plant marijuana, there’s also growing evidence that CBD and whole-plant hemp extracts have numerous potential health benefits. Particularly strong evidence has emerged for the use of CBD in treating anxiety disorders and epileptic seizures. ⁸ ⁹

CBD has also been shown to have anti-inflammatory, pain-relieving, antidepressant, neuroprotective, anti-addictive, antiemetic, and many other beneficial effects. ¹⁰

Unlike marijuana, hemp also has a long list of industrial uses. Every part of the plant has something to offer: ¹¹

Hemp is not only versatile but also biodegradable, grows relatively quickly, doesn’t require much room, and acts as a bioaccumulator that can pull heavy metals and other contaminants out of the soil. ¹²

This makes it one of the most sustainable and environmentally-friendly crops available.

Legality is arguably the biggest reason for the distinction between marijuana and hemp. Since marijuana can cause intoxication, it remains illegal and a controlled substance in many countries around the world. Hemp, on the other hand, is legal in many places, since it doesn’t contain enough THC to make you high.

For example, the 2018 Farm Bill reclassified hemp as an industrial crop in the United States, making it legal to grow and produce hemp-derived products such as CBD oil.

However, some countries don’t differentiate between hemp and marijuana and ban all cannabis.

In any case, there’s a growing movement towards cannabis legalization as attitudes towards the plant — and particularly its medical potential — are changing.

For example, Canada recently legalized all types of cannabis and more U.S. states are following suit every year.

Hemp and marijuana also differ in how they’re grown. For starters, hemp can be cultivated outdoors in a wide variety of climates.

It’s grown on a large scale for industrial use (hence the term “industrial hemp”) in many countries, including China, Canada, France, and the U.S.

Marijuana, on the other hand, is typically grown indoors in homes or greenhouses to maintain the specific conditions needed to produce high-quality flowers.

Another thing to keep in mind is that cannabis plants exist as either male or female.

When growing marijuana, male plants are avoided for two reasons:

Meanwhile, hemp is cultivated differently depending on the desired product.

When hemp is grown for its flowers to produce cannabinoid-rich products such as CBD oil, male plants are also typically removed. However, if hemp is grown for seeds or fiber, both males and females can be used. ¹³

Similarly, when grown for its flower, both hemp and marijuana are given plenty of space per plant to encourage the flowers to fully develop. Conversely, hemp grown for seeds and fiber is cultivated closely together to save space (35-50 plants per square foot).

Cannabis is one of the oldest plants cultivated by humans.

Hemp has been used for thousands of years to make clothing, rope, food, and other products, while marijuana has been utilized as a medicine and a recreational drug for religious ceremonies.

It’s tough to differentiate hemp vs. marijuana throughout history because this distinction was not made until fairly recently. However, historical records suggest that hemp varieties of cannabis were used earlier than marijuana.

Most recently, the remains of hemp rope dating back to 26,900 BC were discovered in Czechoslovakia. ¹⁴ There’s also evidence of hemp use in ancient China and Mesopotamia, some of the earliest civilizations in human history. ¹⁵

Meanwhile, the earliest mention of marijuana comes from an ancient Chinese medical text believed to have been written in 2700 BC, which mentions the plant’s hallucinatory and appetite-stimulating effects among many others. ¹⁶

More archaeological evidence comes from later centuries, including Mesopotamian texts from 2000 BC and Egyptian medical papyri dating back to 1500 BC.

By the time the medical use of marijuana spread to the West in the 19th century, cannabis became a global crop with a multitude of uses. ¹⁷

Unfortunately, this development was short-lived as cannabis was banned in the United States and many other countries in the early 20th century.

It’s not until recently that the restrictions on hemp and marijuana are being slowly lifted in the United States, Canada, and other countries.

3. Andre, Christelle M., Jean-Francois Hausman, and Gea Guerriero. “Cannabis sativa: the plant of the thousand and one molecules.” Frontiers in plant science 7 (2016): 19.

7. National Academies of Sciences, Engineering, and Medicine. “The health effects of cannabis and cannabinoids: the current state of evidence and recommendations for research.” (2017).

17. O’Shaughnessy, William Brooke. “On the preparations of the Indian hemp, or Gunjah: Cannabis indica their effects on the animal system in health, and their utility in the treatment of tetanus and other convulsive diseases.” Provincial Medical Journal and Retrospect of the Medical Sciences 5.123 (1843): 363.

Gleb Oleinik is a freelance CBD & cannabis writer from Vancouver, Canada. He’s read thousands of studies about cannabinoids and other beneficial natural compounds, helping him translate complex science into plain language. He’s also written third-party lab test reports of CBD products and knows the industry inside and out. When he’s not writing, Gleb likes to spend his time in the gym and out in nature.

The only surefire way of differentiating hemp from marijuana is to test them in a lab to see their cannabinoid content. Hemp will contain very low levels of THC (0.3% or less) and significant amounts of CBD. Meanwhile, marijuana will show notable levels of THC. You may also be able to tell the two plants apart by their physical appearance but this won’t always work.

Hemp oil is extracted from hemp seeds, which don’t contain any cannabinoids. It’s different from CBD oil, which is typically made from hemp flowers and contains CBD and other cannabinoids, including small amounts of THC. Conversely, marijuana plants contain significant levels of THC (over 0.3%) alongside other cannabinoids.

The 2018 Farm Bill made hemp fully legal in the United States. Although marijuana is illegal on the federal level, many states have special medical marijuana programs for qualifying patients. Additionally, more and more states are starting to legalize recreational marijuana.