The Entourage Effect [Everything You Need To Know] | CBD Nerds

In the cannabis and, more specifically, the CBD industry, the “Entourage Effect” is a coined phrase you’ll often hear – but what does it mean?

Many explanations of the Entourage Effect are based on anecdotal evidence or conjecture, with a lot of scientific research still lacking or previously barred off from the public. Therefore, we’ll be providing only evidence-based information, formulated through the limited research we do have available thanks to the mild progression of legalization in the country.

Breaking Down the Cannabis Plant

To better understand what this effect does, we must first look at where CBD derives from – that is, the whole plant of cannabis (or hemp). Each cannabis plant is made up of over 400 chemical compounds.

Some of these responses can even be opposing to each other, which ultimately cancels both effects. An example like this can be seen with the two most common and widely known compounds of the cannabis plant: CBD and THC. CBD is the non-psychoactive compound that provides medicinal benefits, while THC is the sole psychoactive ingredient found in cannabis. While they can work synergistically together, high amounts of THC can be canceled out with CBD.

We know about CBD and THC, but what about the other 58+ cannabinoid compounds?

Each of those compounds found in cannabis strains work together to create the very phrase we’re talking about – the Entourage Effect.

What is the Entourage Effect?

Even though THC is the psychoactive ingredient found in cannabis, there are other compounds that help to bring out the euphoric benefits that the plant helps provide.

Myrcene is an excellent example. A compound found in cannabis, Myrcene is also well-known as the sedative-like compound in hops. When linalool is consumed through the cannabis plant, this promotes the strong “couch-locked” feeling that many Indica strains are better known for.

The Entourage Effect is when the largely non-psychoactive compounds present in cannabis modulate the overall psychoactive component of the plant. CBD is a key modulatory component, negating some of the psychosis-like and other negative effects of THC. When co-administered properly with THC, CBD can reduce the negative effects THC has on the memory while stimulating the same medicinal benefit that the formulation was intended for. 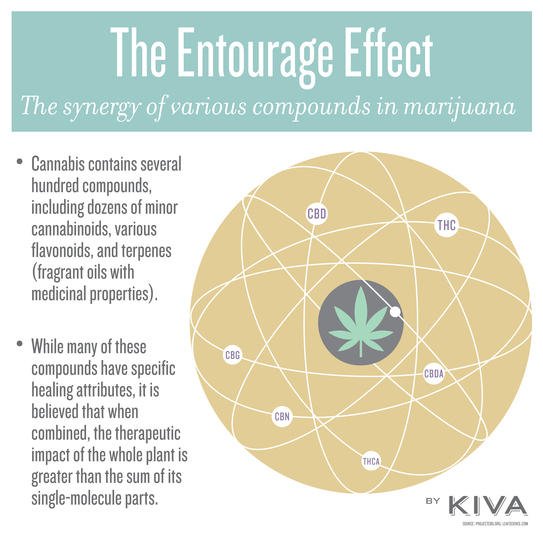 Where Did the Entourage Effect Come From?

A novel molecular mechanism of cannabinoids and the biological activity that the cannabinoids experience in the presence of inactive compounds (AKA the Entourage Effect) was introduced as a concept in 1998 by Raphael Mechoulam and Shimon Ben-Shaba.

In addition, Dr. Mechoulam was responsible for discovering and synthesizing Δ-9-THC. While he was at it, he also discovered the human body’s endocannabinoid system, primarily located in the brain, as well as Anandamide, which is a neurotransmitter naturally transmitted in the brain to bind to THC receptors.

Whole Plant Versus a Single Component

Synthetic THC was produced in the 1980’s, back when we all thought the THC is the only thing in the plant making us feel good. Scientists anticipated the drug, Marinol, to work just as well as the natural, whole plant substance. The scientists soon discovered that patients were still opting for the whole plant instead of Marinol.

Many other cannabinoids play a role in conjunction with THC or CBD to provide the relief and other benefits reported by cannabis users.

The human body naturally produces cannabinoids, which interact through receptors found on immune cells as well as neurons, or nerve cells. These cannabinoids suppress inflammation and reduce excess nerve activity. When consuming plants that have cannabinoids, our receptors respond in the same way through nerve impulses.

Is the Entourage Effect Desirable?

There’s not really a short answer for this question, because it’s a little complicated. The reason we’re explaining the Entourage Effect and what it does, after all, is to help you make a better-informed decision on the CBD products available to you. It is up to user preference, in the end, to decide if they prefer the effect or not.

The best recommendation is to find a formulation that provides the specific Entourage Effect you’re looking for. Otherwise, throwing a full-spectrum CBD oil at the problem can mean a medley of cannabinoids being chucked at the receptors in your brain with no remorse. While you’re not going to have a bad time experiencing the effect, it may simply just not be the ideal effect you’re looking for.

However, if you do find yourself limited on options for formulations, full-spectrum CBD oil is going to provide a much fuller effect than pure CBD-derived oil. This is different for flower, as you’d want to look for a high CBD strain to get the fullest Entourage Effect with medicinal benefits. Regardless, CBD is more powerful when it hasn’t been stripped of its partnered key components.

Further research to attain a higher standard of quality control for these herbal products is a necessity as legalization gets pushed ever onward. With CBD legal across the nation, we’re able to see now just how vast the market of CBD oils and other CBD products really is – inconsistency, quality, and many other factors. The spectrum is wide, which is why we will continue to aim to provide you with the straight facts for CBD and CBD-related products – so you can trust what you’re going to consume.

Is CBD Better With THC?

How to Read CBD Lab Results

Flying With CBD - Everything You Need To Know